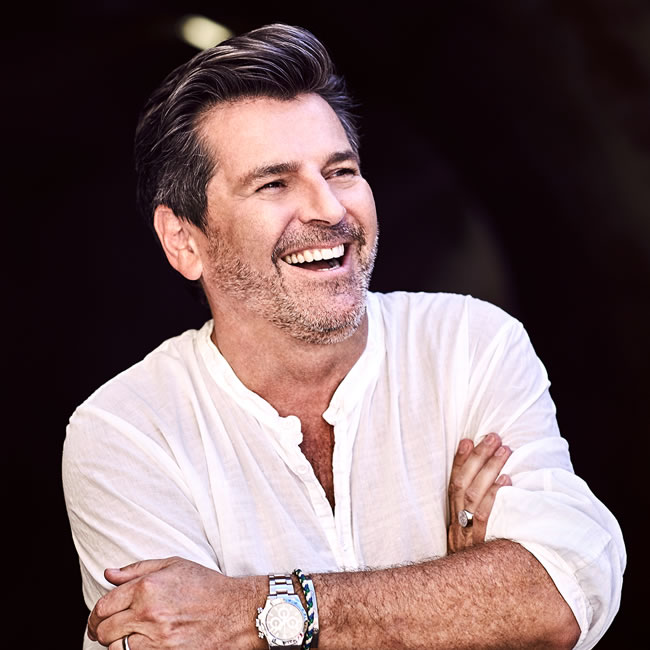 THOMAS ANDERS was born on 1 March 1963 and is one of the few German stars who has made both a national and international impact on music history. During his immensely successful run with Modern Talking, he had countless chart hits, which made him famous in almost every corner of the earth.

“You’re My Heart, You’re My Soul” alone reached No.1 in 81 countries. Worldwide CD sales of Modern Talking and of Thomas Anders’ solo works have now topped the 125 million mark.

Thomas Anders has received more than 420 gold and platinum records and numerous awards for his artistic achievements, including the “Bambi”, the “Goldene Europa”, the “Goldene Kamera”, the “ECHO”, the “World Music Award”, the Golden and Silver “Bravo-Otto”, the “Golden Lion” from Radio Luxembourg and many more.

Despite his triumphant success, Thomas Anders is constantly looking for a new challenge. As a serious and professional entertainer he does not stand still.

The worldwide success he enjoyed with Modern Talking was followed by the release of many solo albums in Germany and abroad. His most recent solo pop album “STRONG” sold over 1.000.000 copies in Russia alone and immediately went platinum.

In his most spectacular music video “Stay With Me”, a solo track from his album “STRONG”, he performed in the role of James Bond in true 007-style.

In 2011 he joined musical forces with Uwe Fahrenkrog-Petersen, who has successfully produced and composed some of the top hits of famous German singer NENA. Their album “Two” shot to number 11 in the album charts and for a brief period the “Gentleman of Music” musically transformed himself into a “Gigolo.”

After releasing more than 25 albums, Thomas Anders fulfilled his long-standing dream to record his first Christmas album in the style of an American Songbook. Just like its architect, “Christmas for You” was a multi-faceted kaleidoscope. New, yet traditional and international yet private, this was a work that reflected the very essence of the artist himself.

In 2016 Thomas Anders followed up with another successful album. HISTORY pays homage to his time as part of the most successful German pop duo ever – Modern Talking. The album follows the wishes of many fans and reflects his live concerts from all over the world.

In spring 2017 came a big surprise! Thomas Anders is to sing in German.

“Pures Leben” Pure Life is his first German-speaking album, showing his attitude towards life in all its unbridled glory. The album succeeds in allowing the listener to experience a multitude of varying, everyday situations and moments through his individual songs. With a little twinkle in his eyes Thomas Anders sings about things that really matter in life. For this album he has worked together with some of the most successful German songwriters. (Helene Fischer, Howard Carpendale and Udo Lindenberg.)

After singing in English for so many years, Anders had to focus on doing the same from scratch in his native language. He dealt with important phonetics and asked himself the most important question: Where do I stand with my age?! In working together with his producer Christian Geller, Anders has found a way to deliver his new and catchy pop songs to his audience in an authentic and convincing way.

In succession, the second German-language album “Ewig mit Dir” appears in 2018. With Christian Geller, he develops further songs that reflect his energy and joie de vivre. That is exactly what Thomas Anders would like to pass on – without any frills, sometimes profound. The song “Das Leben ist jetzt” radiates with great directness that we should not waste time, enjoy the moments and live in the here and now.

This project gave rise to the idea of ​​continuing to spin this story. Together with the next single “Sie hat es wieder getan”, this is finally the beginning of a joint album by Florian and Thomas. Due to a pandemic, “Das Album“ is not released in March 2020 as planned, but in June and establishes a close collaboration with Germany’s most successful entertainer. 26 sold-out halls at the nationwide Schlagerfest by Florian Silbereisen in spring 2020 document the absolute enthusiasm of the fans. His participation in these shows, spells Thomas Anders that this way was the absolutely right decision. The star now comes a great deal closer to his German fans. It happens what was his wish for so many years. Music connects and music keeps alive.

With their first joint longplayer “Das Album”, the two succeeded in jumping to the #1 spot in Germany, Austria and Switzerland three times over at the first go. “Das Album,” which also featured the pre-released hit singles “Sie sagte doch sie liebt mich” (2018) and “Sie hat es wieder getan” (2019), managed to top the German and Austrian charts for two weeks straight and then spent an entire year in the Official German Album Charts. Finally, they received a platinum award in Germany and could also enjoy gold in Austria. After shortening the wait in 2021 with the programmatic single “Wir tun es nochmal!”, the next chapter for the Anders/Silbereisen duo dream team is actually beginning.

After his successful duet album with Florian Silbereisen, Thomas Anders is once again dedicating himself to a solo project and in the spring of 2021, with his album “Cosmic”, he will answer the long-awaited wish of his international fan base – finally, an album in English again. The song “Cosmic Rider” sounds just like a song has to sound to make the heart of die-hard fans beat faster: On the one hand, 100% the classic Modern Talking sound, but this was consistently thought out and transported into today’s time. The track was again produced by Christian Geller, who was also responsible for the duet album with Florian Silbereisen.

On to new shores

Much has been written and said about Thomas Anders in his career, which continues to this day. In 2022 he finally uses a trendy medium, the podcast, and turns the tables once. Now he speaks! About successes and failures, highs and lows. Unadorned and open, completely privately from his home, host Andreas Kunze takes him on a journey through time, in which he also looks back on the stories of his eventful life with a twinkle in his eye.
Guests include friends, people close to his heart and companions who have accompanied him on his journey to the present day. Sometimes humorous, sometimes serious, but always from the perspective of a man who has remained down-to-earth.
The result is an extraordinary podcast: honest – authentic – … simply Anders!

Thomas Anders is also known to his fans as a man of pleasure, not least through his cookbook “Modern Cooking”. Also in 2022, he enters into a cooperation with the renowned Rheinhessen winery St. Antony. Together with its managing director, he will create the Thomas Anders Pinot Gris. With winemaker Dirk Würtz and wine lover Thomas Anders, two men have found each other who combine lifestyle and joie de vivre with a love of craftsmanship, enjoyment and tradition. For both, wine means home, culture, lifestyle and nature.

Continuation of a successful duo

In December 2022, Thomas Anders and Florian Silbereisen set course for their second album together. With the single “Alles wird gut” they not only set an optimistic sign, but at the same time starts the countdown to the new studio album “Nochmal”, which is planned for fall 2023. The next chapter for the duo dream team Anders/Silbereisen is really starting now.

The thoroughbred musician with a treasure trove of experience

After 40 years in the music industry, Thomas Anders continues to excite and enthuse the music world as a solo artist. His fans cherish his fascinating charisma and the stylish intimacy he shows in his concerts. They love the feeling and mood he comes across with in his songs.

Thomas Anders is a musician through and through with a wealth of experience in the entertainment industry. He has been on stage for more than 40 years and made his first TV appearance 35 years ago in a popular German show. After that his career consequently went in one direction – up! His concerts took him all over the world – from Cape Town to Hong Kong, from Tel Aviv to New York, from Santiago de Chile to Moscow. Toronto, Hanoi, Prague, Berlin, Budapest, London, Washington, Los Angeles, the list is endless …

To this day Thomas Anders remains the only international star to have performed twelve times at the historic Kremlin in Moscow, the Russian equivalent of the Royal Albert Hall. It goes without saying that he sold out on each occasion.

Thomas Anders is a star who is able to present himself in a number of different ways. From powerful concert performer to confident show presenter, he is equally at home at galas or soirées where he is known for his elegant and personable appearances. He takes his audiences on an impressive musical journey through time by presenting the countless hits of Modern Talking and many other world famous pop classics. Yet no matter where Thomas Anders performs, he will always be “The Gentleman of Music”.

Thomas Anders has established himself as his own brand.

He is often invited to give speeches at business and marketing academies where he gives his expertise on how to build a successful career and work on corporate branding based on his own experience. Exemplified by the release of a book “Der Mensch als Marke” which can be translated as Human Brands, he is a living example of image building.

Despite his huge popularity and all the opportunities that came his way, one thing has never changed – the deep connection he has for his homeland. Although he has traveled the world, the city of Koblenz, where he has lived with his wife Claudia and son Alexander for many years, remains the absolute center of his life and the source from which he draws strength to achieve great and continuing success.

As a down-to-earth “Koblenzer”, he knows how to use his celebrity status in just the right way and has been acting as patron of the “Koblenz Child Protection Association” since 2008. He very much enjoys working with and for children. Although he is constantly receiving enquiries from all over the world to support other good causes, the Child Protection Association in his home city remains particularly close to his heart.